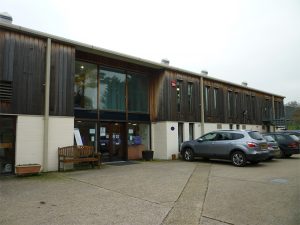 The charity rented various premises in Hampshire over the years and it was not until 2003 that we began to operate from a training centre of our own in Heyshott, West Sussex. A former polo yard and farm with various outbuildings, the Heyshott site had potential for conversion to specialist facilities.

Dogs were trained while building work progressed and the Southern Centre was officially opened in 2005 by our Patron, HRH the Duke of Gloucester KG GCVO.

A growing waiting list and a need to expand across the UK led us to purchase a derelict pig farm near Loughborough, Leicestershire in 2012. Our Capital Appeal was launched to raise the funds to develop this into our new Midlands Centre.

The main building was completed in 2014. In January 2017, we opened the kitchen and wheelchair accessible accommodation and the final phase to build a kennel block for up to 40 dogs in training received the finishing touches in the early months of 2020.

Building this new state-of-the-art training centre in the East Midlands has given the charity the facilities to serve many more people in the years to come. We are indebted to all those who have played their part in getting us to where we are today, and to the funders of our centres including: