Posted 1 year ago in the Impact series, Our partnerships categories 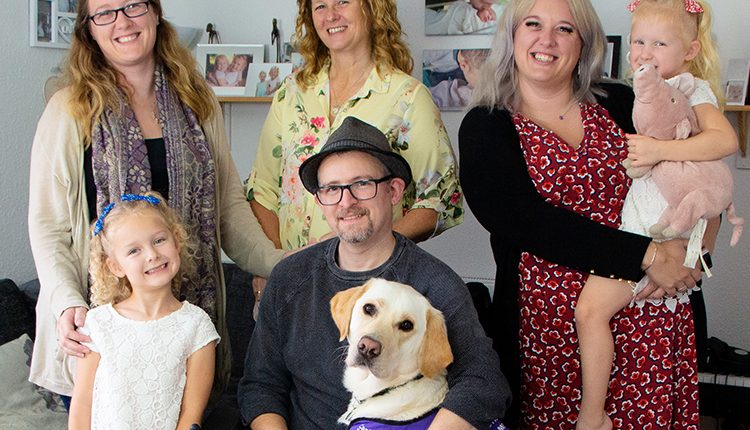 Multiple Sclerosis (MS) is currently the most frequent condition of the people the charity provides amazing assistance dogs to and is currently helping over 430 people living with physical disabilities across the UK, including over 80 people who have MS.

Sean Anderson, from Hampshire, started having symptoms of MS in early 2000, but wasn’t officially diagnosed until 2007.

The condition affects Sean’s nerves and immune system, and is steadily becoming worse over time.

40-year-old Sean said: “I couldn’t go into the garden or outside at all without relying on my wife, Josie, to take me out which left me feeling isolated. I also had to rely on my young children, Elsie and Mimi, to pick things up that I dropped as I couldn’t reach them from my wheelchair. I was very reliant on others which made me feel so frustrated and humiliated.”

As time went on, Sean was losing more of his independence and his wife of seven years, Josie Anderson, was having to step in to help him with daily tasks 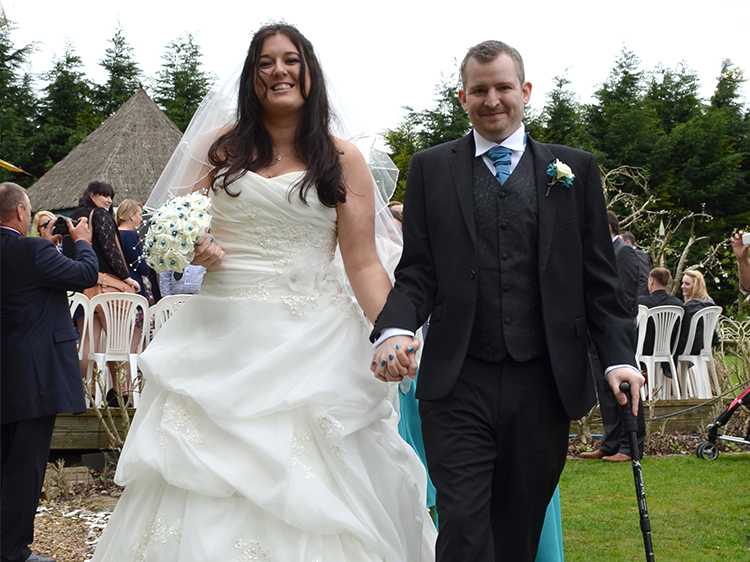 Josie, who started dating Sean only one year before his diagnosis, said:  “I couldn’t leave the house because someone always needed to be there for Sean in case he fell or needed something. If he dropped something it had to be me or our daughters picking it up for him and if he needed something from another room we had to get it for him.”

The impact of Sean’s diagnosis was felt across the whole family, as Josie’s mum and sister worried about how the condition would affect Sean and Josie’s lives.

Jen, Josie’s twin sister, said: “I think it is very hard for Sean to ask for help and to rely on other people, but Josie was always willing to ask us for help, as there were things she couldn’t do because she always had to be there for Sean. It can be really hard when you’ve got to be around for someone all the time, which affected my relationship with my sister too, as we are very close.”

Jen along with their mum, Jan, watched as Josie became a carer for Sean whilst his condition progressed, meaning they couldn’t spend as much time together as a family.

Jan, Sean’s mother-in-law, said: “We didn’t really know about MS at the time Sean was diagnosed and although we wanted to find out more we were also scared to. It was really tough watching his condition progress because Sean was so dependent on Josie and she had the children to look after as well.”

Life for the family changed when Sean was partnered with assistance dog Lucas, provided by Canine Partners, in August 2018. 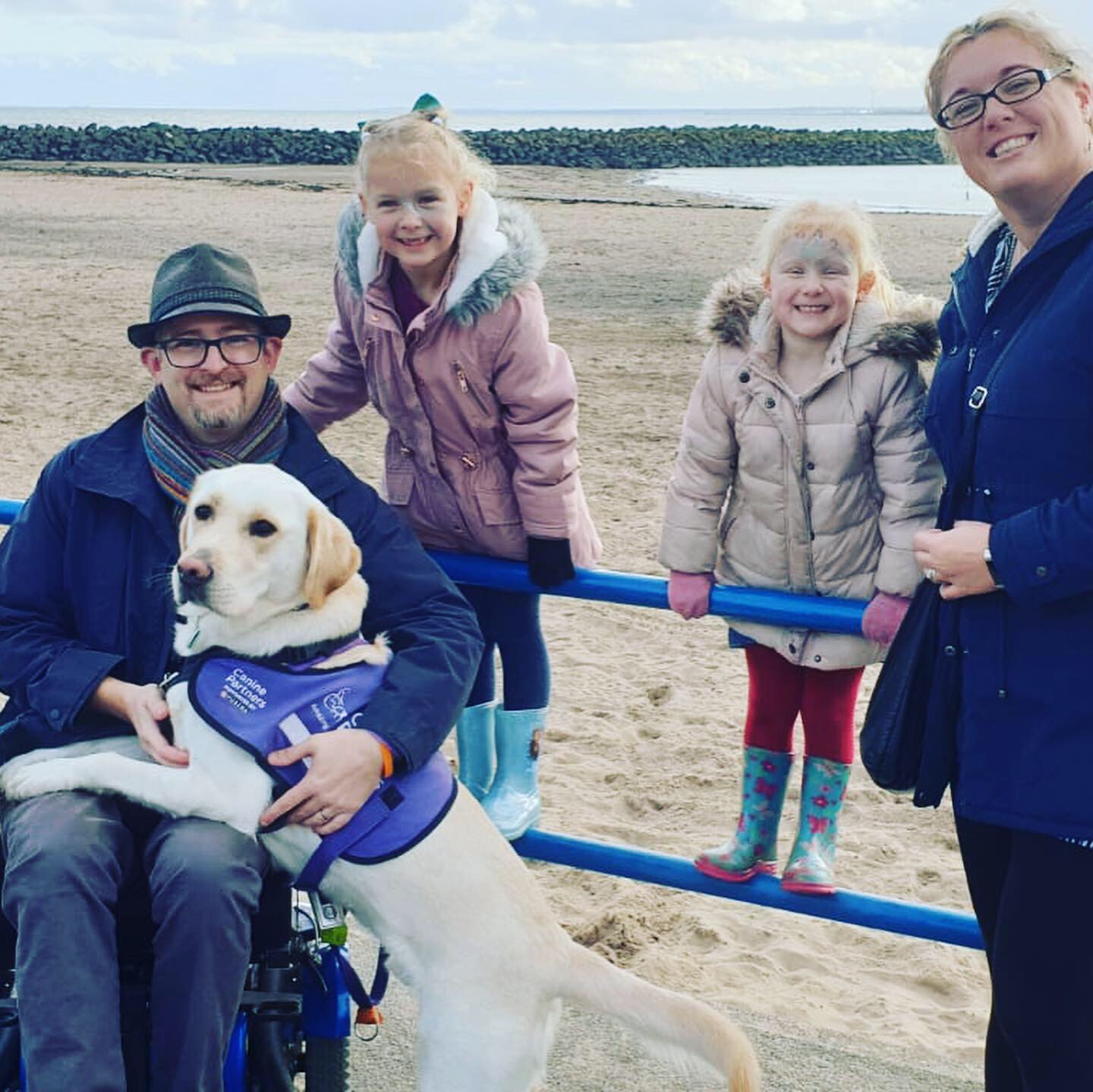 Josie said: “Our lives have changed so much now that we have Lucas, as now I can leave the house knowing Sean’s got Lucas with him so if he needs something or needs help Lucas can get it. Although Sean needs his space, he didn’t do so well with his mental health when he was by himself for too long, but having Lucas there has made a massive difference as they’re like best friends.”

For Sean having Lucas, a yellow Labrador X Golden Retriever, also means he can be a more involved parent to his children, including supporting their bedtime routine, something which he struggled to do before.

Sean said: “Lucas will take things to Josie or the children, for example quite often Elsie will forget her dolly downstairs and she has it for bed time. Whilst before there wasn’t much I could do to help, now I can ask Lucas to go and take it to her which makes me feel great.

“I feel more independent and less incapable now that I have Lucas.”

Lucas’ impact has also reached Jen, who has rediscovered her sister relationship with Josie. Jen said: “Josie would have to stay at home with Sean or he would have to come out with us, which changes the dynamic a bit like it would if my husband came. Now, we can do more together as sisters on our own which is really nice. Sean is so much happier because he doesn’t have to rely on Josie as much, which I can see has released a lot of Josie’s worry.”

Having Lucas means that the family are able to do more together and can continue with their day to day lives, without Sean’s condition having an impact on what they can do. 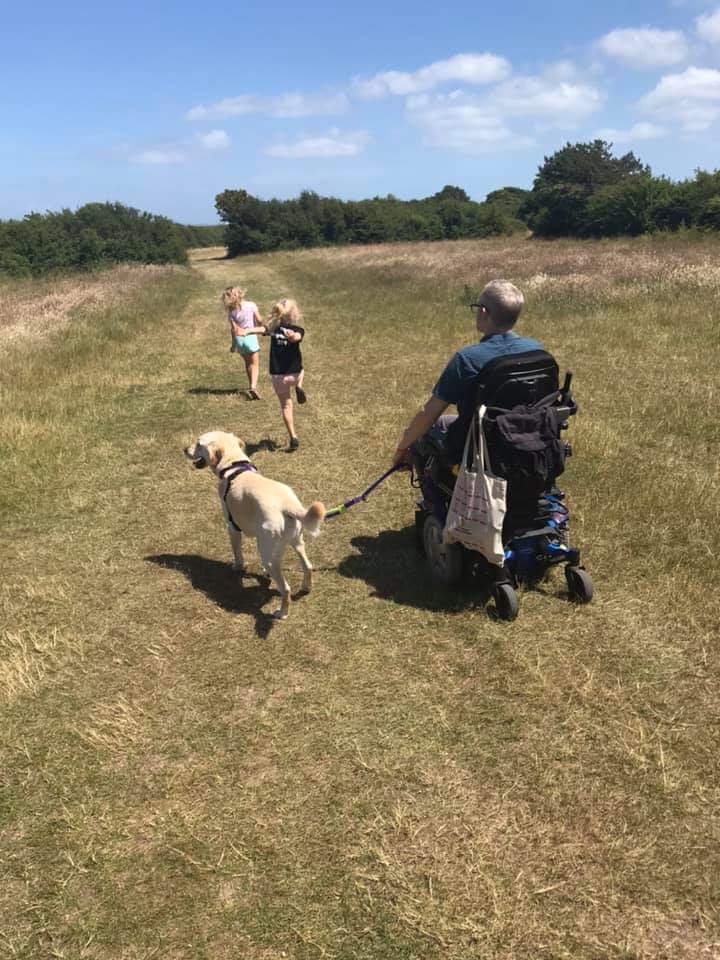 For Josie, this means she can leave the house knowing that Sean is in safe ‘paws’!

Josie said: “My own mental health has improved too, as I don’t feel guilty for needing a moment to myself. If I need a break, I feel comfortable to go out of the house knowing that Lucas is holding down the fort at home.”

This wouldn’t have been possible without canine partner Lucas – he enables Sean to be an active part of his children’s lives, helps Sean with daily tasks so he can be independent, and gives Josie, Jen and Jan peace of mind that Sean is safe when they aren’t there.

Sean’s young daughters Elsie, eight, and Mimi, five, have noticed a difference too. They said: “Before daddy had Lucas he would sleep a lot, but now Lucas is here he stays awake more. Daddy is happier with Lucas and he takes us out for walks, which we really enjoy and we play with Lucas in the field with his toys when he isn’t working for daddy.”

Canine Partners relies on donations and legacies to fund the creation of our life-changing partnerships, which transform the lives of not only their human partner but the lives of their family too.

Any donation made to Canine Partners could help more people, like Sean, be partnered with an amazing canine partner assistance dog.

Please support our appeal this spring. A donation today will mean continued support for our partnerships, like Sean and Lucas, in these most difficult times. And extra funds will help to train the amazing dogs of the future, so they are able to support their partner, whatever challenges may lie ahead. Please click here to make a donation.