Meet Jon, from the Isle of Wight

Posted 4 months ago in the Our partnerships category

In 2007, Jon Giemza-Pipe was injured while serving in Iraq as a Major in the Royal Artillery. His injury meant that Jon was medically discharged from the forces after 22 years of service. 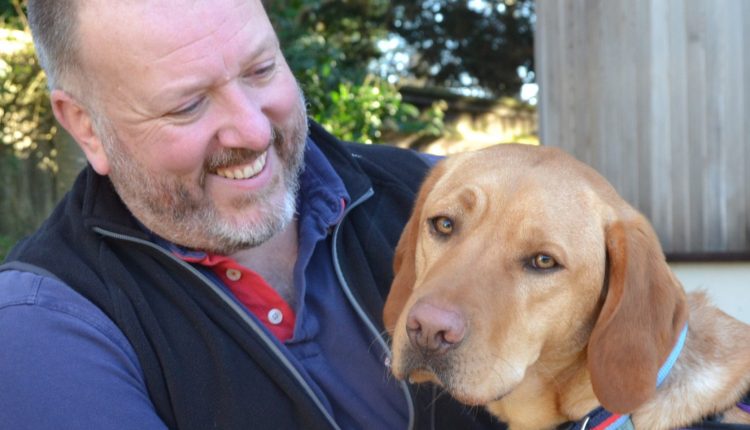 In 2007, Jon Giemza-Pipe was injured while serving in Iraq as a Major in the Royal Artillery. His injury meant that Jon was medically discharged from the forces after 22 years of service. Now, 3 years after leaving the army, Jon talks about his life with a spinal injury and how his canine partner Baxter, and his predecessor Toby, saved his life. This is his story.

One of the problems you have at the beginning is that you mourn the loss of your former life. I was always very outgoing, robust and enjoyed being outside. Suddenly I found that unfortunately being in a wheelchair meant a lot of things became not impossible to do but a lot harder to do. I really did start to isolate myself.

Having had a canine partner dog before, who I sadly lost to illness, I had some ideas of what to expect. I had Toby before for about three years and he saved my life, I’ll be completely honest about that. He completely saved my life. I know it’s one of those phrases that people use a lot, but really in terms of depression and isolation it was a massive thing for me.

Meeting Baxter for the first time was absolutely incredible – he gave me such a buzz. One of the great things about having a canine partner is you end up doing things which you need to do because you’re looking after a dog but it’s also massively beneficial to you. Getting out in the fresh air on a regular basis is not something that if you’ve got some kind of disability you might want to do because you feel it’s too difficult or it’s going to hurt. Baxter has helped me get back into society and start living the life that I’ve now got.

There was a real problem with me ending up in a wheelchair – I felt very much separated and that everything was too difficult. With Baxter I don’t think there’s anything I can’t do. It’s nice because all of a sudden I’m not hiding away; I’m actually standing out a bit more. I don’t feel like I need someone to come with me to give me that confidence boost for when I am out and about.

Things like going to London Waterloo Station, which is my idea of hell. I went there on my own in a wheelchair and I felt overwhelmed. I felt like I disappeared into the noise and into the crowd there. But with Baxter, I’ve got something else to concentrate on. I worked him through the crowd and all of sudden I was through the people and hadn’t even noticed it. They’ll move and give you a bit more space – all of a sudden it’s like people realise you’re there.

I am really bad at dropping things – anything from my credit card to my phone to my walking sticks. He’ll pick them up for me, which is brilliant. I’m always dropping my gloves so he must pick them up over five times a day. All these bits and pieces are fantastic, but I think the psychological benefit of having the dog is one of the biggest and most profound.

He’s such a part of me now that whatever I’m going to do will have him involved in it. I can’t see anything that I do in the future not involving him. These dogs are incredible and the tagline ‘Amazing Dogs. Transforming Lives.’  for Canine Partners is not just a tagline. It’s all done with such an air of love and positivity that it’s infectious. I’ve ended up with an absolutely amazing dog who changes my life on a daily basis.