Posted 3 days ago in the Impact series category

Emma was partnered with canine partner Barty in April 2019. This is her story. 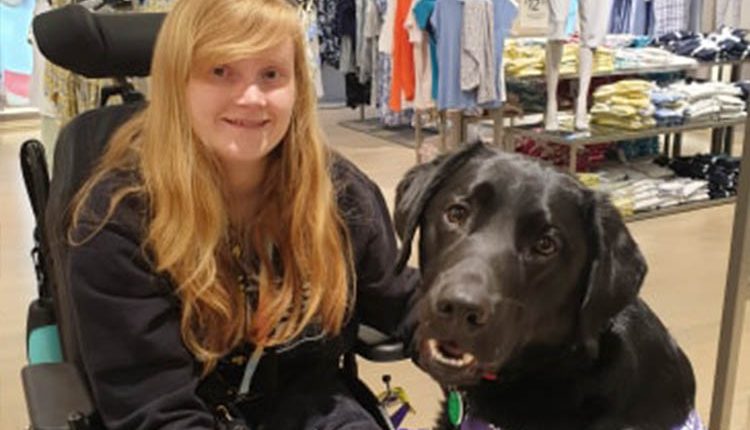 My name is Emma and I’m 26 years old. I have several conditions which affect my everyday life, including Ehlers Danlos Syndrome (EDS), Postural Tachycardia Syndrome and Anderson-Tawil Syndrome (ATS).

EDS affects my joints and my skin. I can bruise and cut easily and my joints dislocate easily, too. ATS affects my muscles, which in turn makes my EDS worse. I get muscle weakness and pain, which means I should have to rely on my joints more, but because of my EDS this isn’t really possible. Both of these conditions together can make life very difficult. I also get periods of paralysis in parts of my body due to my ATS which makes going out very difficult as I don’t know when that will happen. 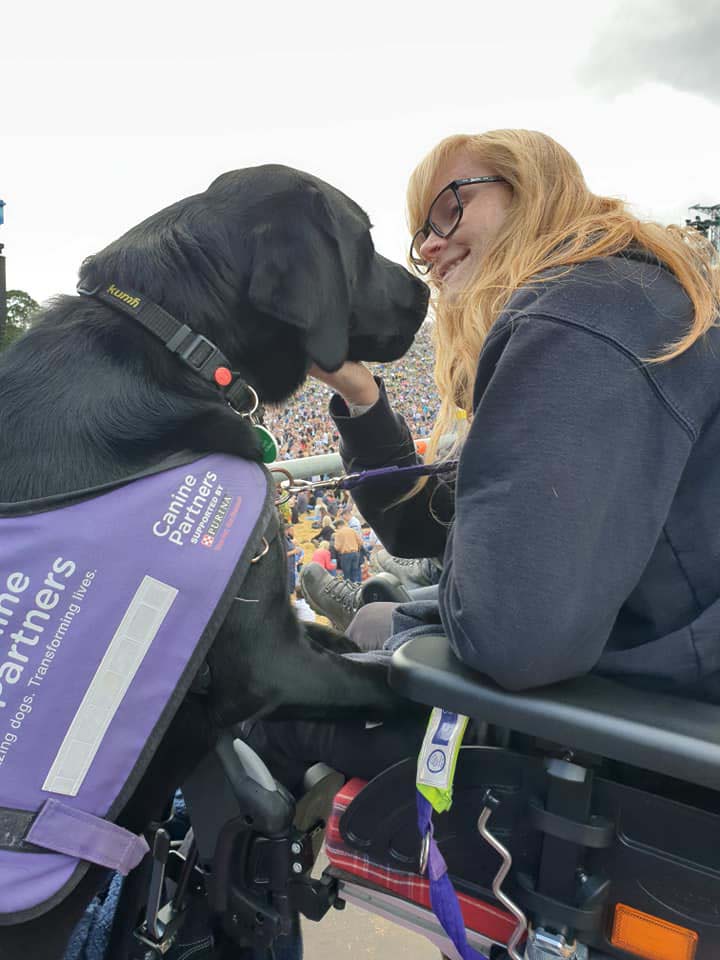 I haven’t always been physically disabled, and my life changed very quickly when I was 17, when I became unwell. I had all of my physical independence and full mobility. Within about two years I went from being able to walk unaided to using an electric wheelchair full time. My life changing so drastically was incredibly hard to deal with as my independence had been snatched away from me in such a short space of time.

This meant that I could no longer go out of my house on my own, and I had to rely on my mum or my brother or a close friend to come with me. My mental health was in a pretty bad place. I barely left the house as I needed someone with me, and as my mum and brother both work full time it was very difficult. I was spending almost all of my time on my own, and I was very low thinking about the cards that I had been dealt. I felt as if so much of my life had been taken away from me so quickly, and I suddenly felt like a burden on my family due to now being so reliant on them. I felt embarrassed to go out in my wheelchair because of my lack of independence. I had a lot of anxiety and no confidence to go out and do things.

One day when my brother and I were out, I saw a lady in a wheelchair who had an assistance dog. I saw them going around the store and saw how the dog was helping this lady, and thought about how much easier life would be for me if I had a dog to help me with everyday things. I went home and looked up assistance dogs, which led me to Canine Partners.

Everyday tasks no longer presented a barrier for Emma when she was partnered with canine partner Barty in 2019.

When I first met Barty it was very surreal. I’d been on the waiting list for a while, so it was very emotional to be told that I was going to be partnered with a dog. Barty was brought into the room by his Advanced Trainer, who told me we were going to do some basic tasks together to see how Barty would react. She said not to be worried if Barty brought dropped items back to the Advanced Trainers instead of me, as that would be normal at this stage. Barty brought everything that I dropped straight back to me, and I thought right away that he was going to be perfect for me.

In terms of physical tasks, Barty does so much that makes my life so much easier. He’ll help me undress, take my shoes and socks off, close and open doors and bring me his bowl when he’s finished eating! He also helps me when I drop things, which is invaluable, as I can easily dislocate my hip if I bend down to reach something. They are all little things, but having Barty to do these things eases the pain and discomfort that I would be feeling if I had to do them myself.

Having Barty has given me far more independence and I don’t feel like a burden on my family anymore. It’s not nice having your mum or other family member helping you get dressed when you’re used to doing it yourself. Now I’ve got Barty, I can do these things on my own. I can go out on my own, which in turn has helped with my mental health hugely, even just getting out of the house more often. I take Barty for walks in the forest on my own, which is something that just didn’t seem possible for me before.

Alongside my physical conditions I also have autism. Although Barty hasn’t been trained for it, he makes a massive difference with that as well. When I go out in public and it’s very busy, sometimes it’ll make me feel very anxious, which somehow Barty seems to be able to pick up on. He’ll very often come up to me and rest his chin on my knee, so I can give him a stroke, which instantly calms me down.

The wider impact of having a canine partner became apparent immediately for Emma.

Barty has had a wider effect on my life socially. Before, I always felt that people would just see the wheelchair and not know how to approach or speak to me. Barty has changed all of that for me and it feels like having him next to me completely breaks down that social barrier. I got Barty about half a year into my first year of university, and the first half was very difficult. I felt that social barrier there and felt quite excluded from the rest of the students because of my conditions. When I came in with Barty that immediately changed. Suddenly, people would see I’m with him and see past the fact I’m in a wheelchair, and actually come and talk to me about Barty and what he does for me. It became much easier for me to make friends. I think I spoke to more people in my first lecture with Barty than I did in the entire year beforehand!

I find talking to others and making friends hard anyway because of my autism, and my physical disabilities only made that more challenging. Now I have Barty, it’s so much easier, as he’s the conversation starter. A few years ago, the thought of talking to strangers when I’m out was terrifying to me. Now, I’ll talk to so many people on a day-to-day basis when I’m out with Barty without even thinking about it. If you told me a few years ago I’d be talking to three or four different strangers I’d have laughed at you! Now that’s almost a daily occurrence for me and Barty. 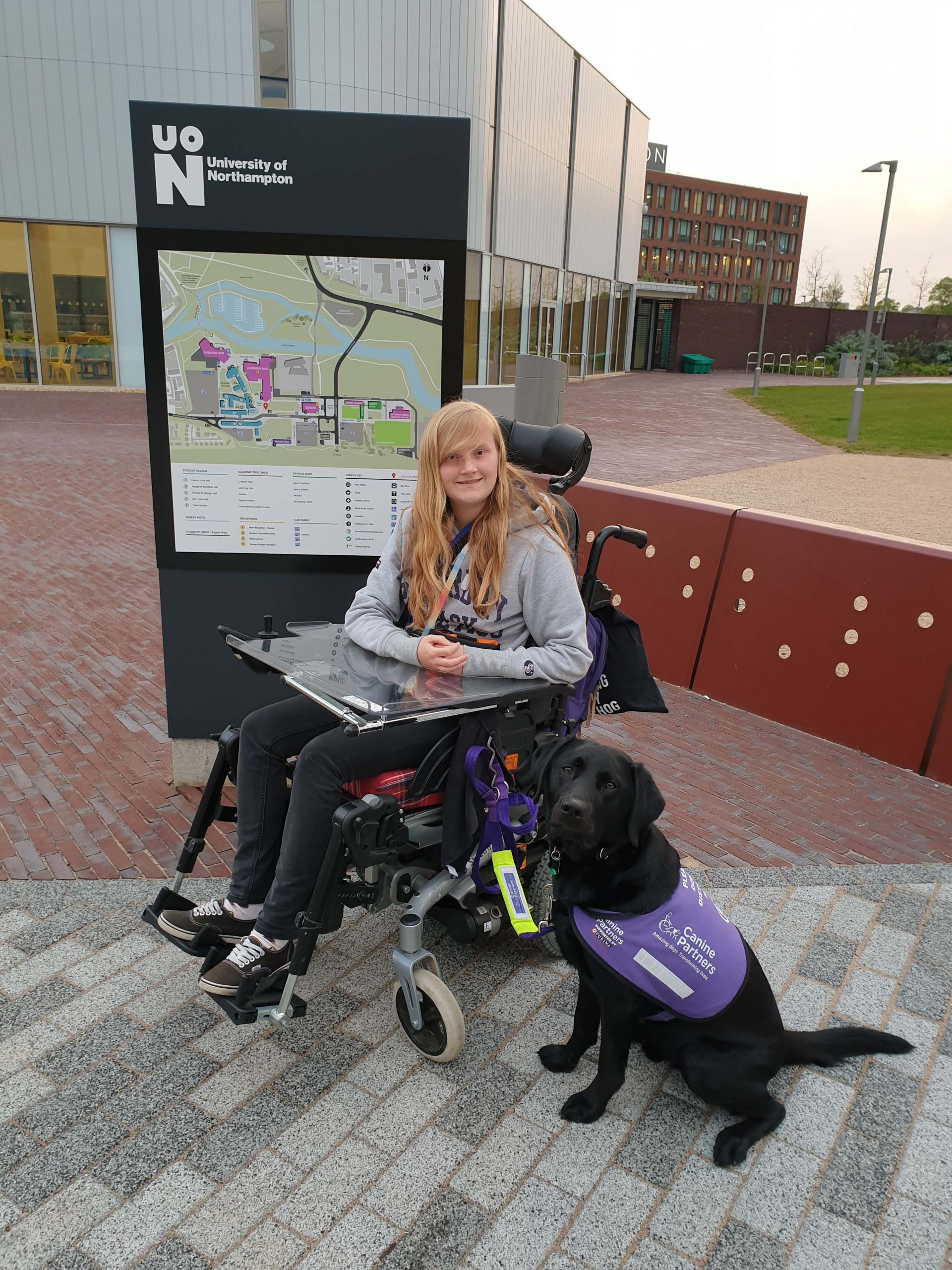 Having Barty by her side opened up opportunities for Emma that she never imagined were possible.

I have done a lot of work with my university since having Barty, and more recently I have been asked to give talks to other students, talking about autism, my own experiences and how others can better understand the condition, sometimes in front of over a hundred people. There’s no way I would ever have had the confidence to do anything like this before Barty opened everything up for me. Now, I feel like I can take these things on. Some people might wonder why Barty makes a difference to this kind of thing, but knowing he’s next to me just gives me a level of confidence and relaxation when I’m in these different environments that I wouldn’t have had before. Together, we make a perfect double act and I wouldn’t be able to do something that I’m so passionate about without him there.

As well as my work with the university, I am also on the autism advisory panel for Northamptonshire County Council. We help different organisations, such as the police or private companies, understand autism better and come up with a strategy to adopt autism-inclusive policies and practices in their workplaces. Barty has allowed me to go along to these meetings independently, and before I would never have been able to do that without a family member coming with me. When we have steering group meetings, they have a list of people who have attended, and Barty’s name is always down! He’s become an honourable member of the group, and rightly so.

Working on the panel is exactly the kind of thing that I wouldn’t have been able to do before Barty. He really has changed my life completely. Although it all started with him giving me the confidence to go to the supermarket, that confidence has grown and led me on to opportunities and experiences I never could’ve imagined after I became disabled. Before, I wouldn’t even have wanted to leave the house, so when I sit back and think about what I’m doing now I am very proud of how far I’ve come. Before I had Barty, literally just closing the door could cause me a huge amount of pain, so I would just avoid going out the house. Little things like that have eventually led to the work I’m doing now.

Emma is looking forward to the future with a newfound optimism with the help of her canine companion.

I’m going to be maid of honour for my best friend’s wedding in a few months’ time, which I’m so excited about. It’s a night away in a hotel, and before I would’ve either had to say that I wouldn’t be able to stay or my mum or brother would have had to come with me. Having Barty there means I can go there and stay on my own, because he’ll be able to help me with so many things like getting out of bed and getting dressed on the day. Instead of worrying about the logistics of the day like I would’ve done before, I will just be able to go along and have an amazing time supporting my best friend.

My relationships with my family have also been different since having Barty. I see that most with my brother. He’s three years younger than me and it was a huge responsibility for him to take on some care responsibilities for his older sister at quite a young age. I didn’t want to have to ask him to come to the shops with me because I couldn’t go on my own. Having Barty with me now has taken so much pressure off of him, and now when we go out we go out to have fun, and he can just be my brother again.

I wouldn’t even want to imagine what my life would be like without Barty, and I’m so grateful for Canine Partners for bringing him into my life. He’s made so many different things possible in my personal and professional life and has impacted my life in more ways than I ever could’ve dreamt of when I got him. He’s given me my life back and now I’m so excited for what the future will bring for me.

From Sunday 3 July to Monday 4 July, we are undertaking an exciting new, 36-hour matched funding appeal to help Canine Partners build a brighter future after the pandemic, with each donation DOUBLED by our generous matched funders.

Find out more and how you can get involved and donate now at caninepartners.org.uk/changing-lives-together-appeal