Posted 6 months ago in the Impact series, Our partnerships categories

Sharing the life-changing impact our assistance dogs provide to disabled people, their families, friends and communities. 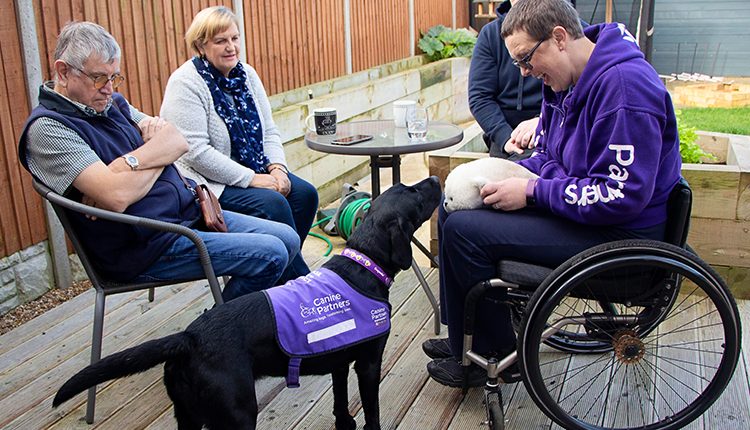 Canine Partners currently supports over 400 active working assistance dogs in the UK helping people with conditions such as Multiple Sclerosis, Spinal Cord Injury, and Cerebral Palsy, of which 95%* of our partners said that their canine partner assistance dog has met or exceeded their expectations.

Nicki Berry, who has a Spinal Cord Injury, Cauda Equina Syndrome and Essential Tremor, has had a Canine Partners an assistance dog for over three years.

Nicki’s injury made things physically very difficult for her and her family, so they had to move back to the UK from Finland to get the support they needed.

Click here to find out more about Spinal Cord Injury

49-year-old Nicki, from Yorkshire, said: “After my injury life was just horrible, I was fortunate that I had my husband, Neil, and our two sons as we are a very close family and they did such a lot to make life manageable. I just felt like I was going to be dependent on other people forever and I hate asking for help from other people, as I have always seen myself as strong and capable of doing what I need to do.” 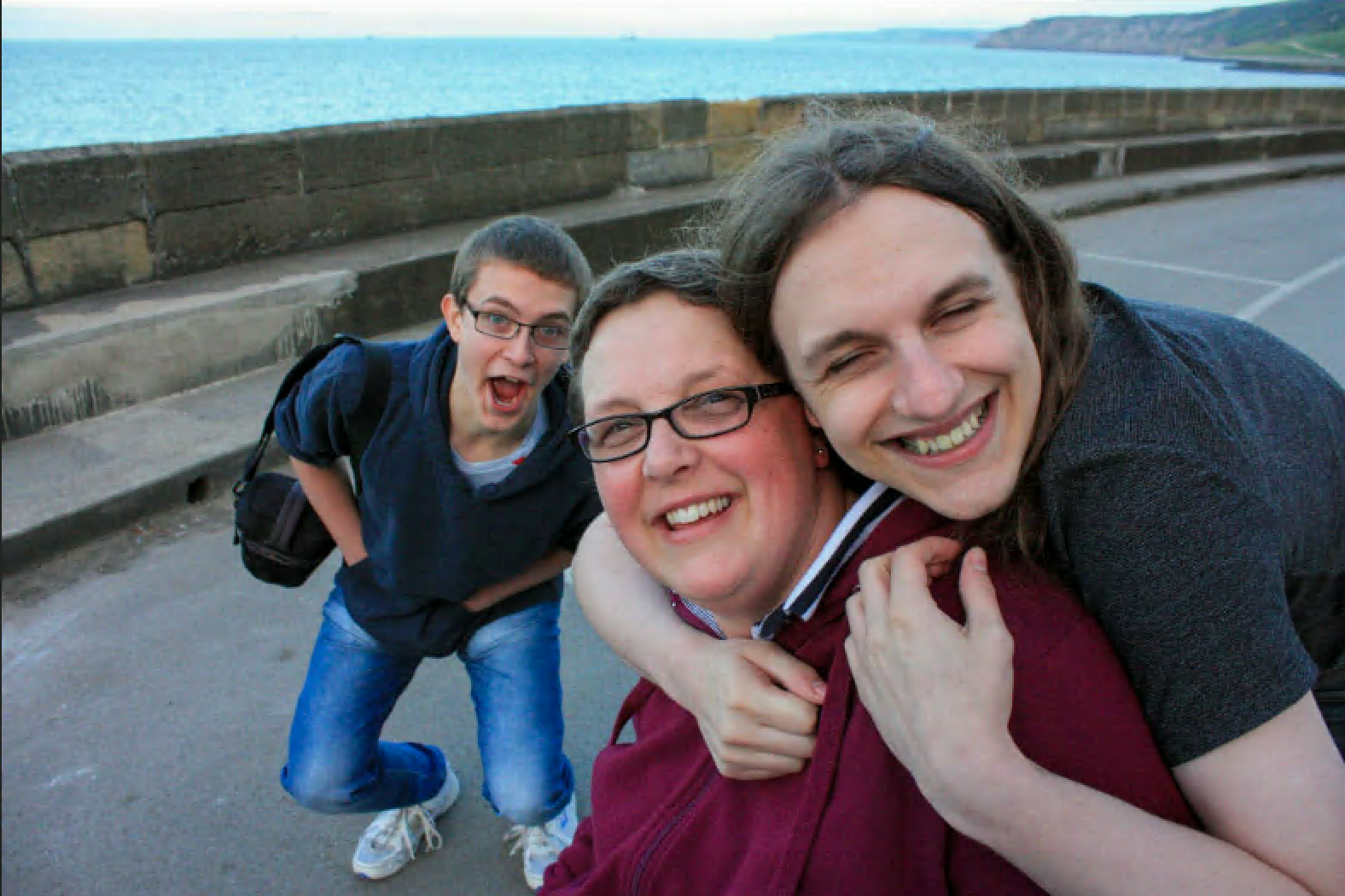 Neil Berry, Nicki’s husband of 27 years, and their two young sons, who were just 15 and 17 years old at the time of her injury, shared the responsibility of caring for Nicki and doing the tasks that needed to be done on a daily basis.

Neil said: “There is absolutely nothing that can prepare you for having to watch your loved one in absolute agony and it was particularly challenging for both our boys watching their mum go from being fit, healthy and active one day to being doubled up in agony the next. She couldn’t do anything herself, 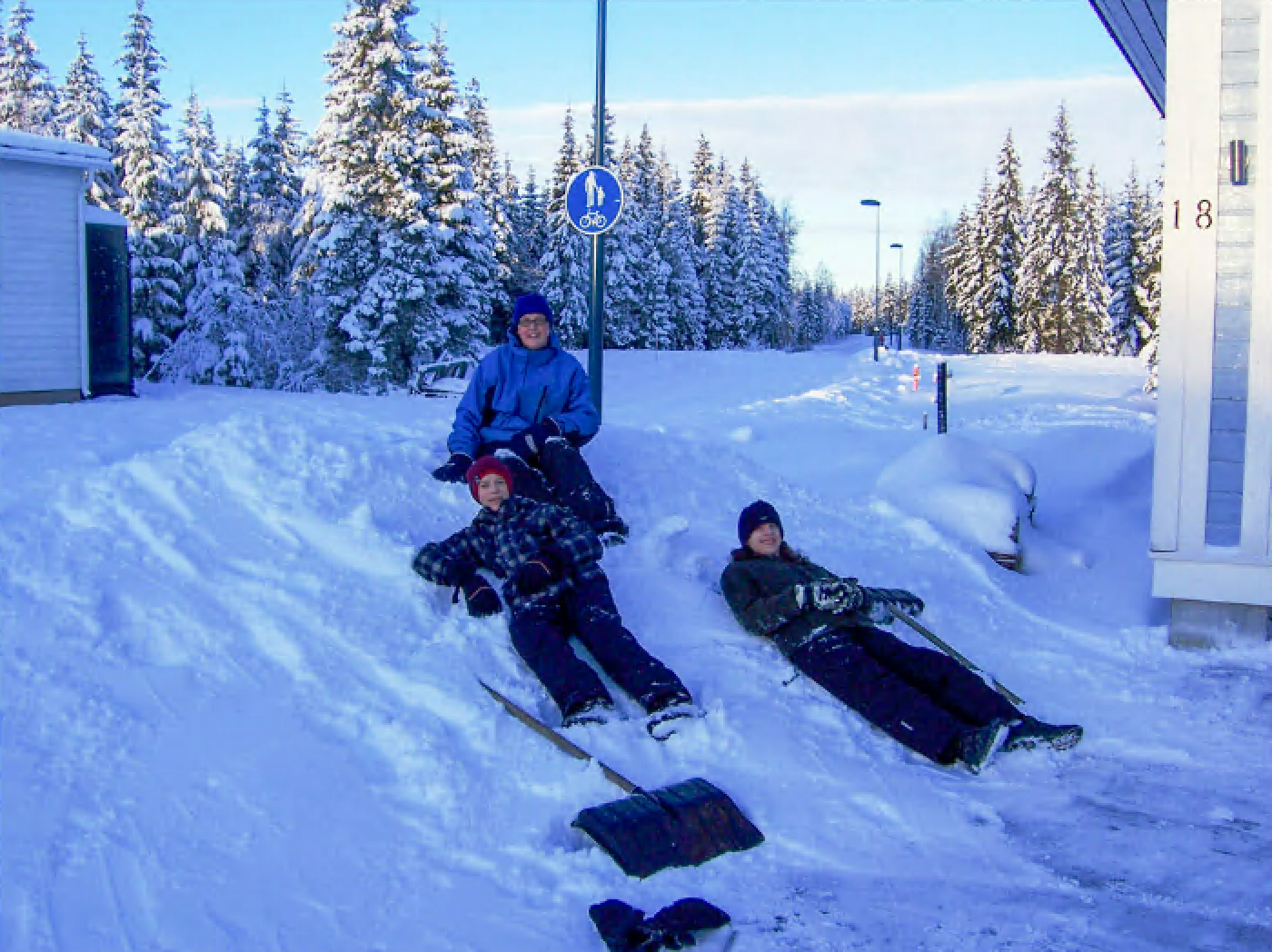 including going to the toilet, bathing and feeding herself. It was like a light switch – it suddenly happened.”

Nicki’s parents, Janet and Mike Vyvyan, were living in England when Nicki was injured and found it difficult to be apart from her.

Nicki’s mum, Janet, said: “They came back to England and lived with us for a while but initially we were very worried as Neil was doing a lot of caring for Nicki.  As we are getting older ourselves we worried that if anything happened to Neil, how would we cope looking after Nicki?”

Life for the family changed when Nicki was partnered with assistance dog Liggy, provided by Canine Partners, in November 2017. 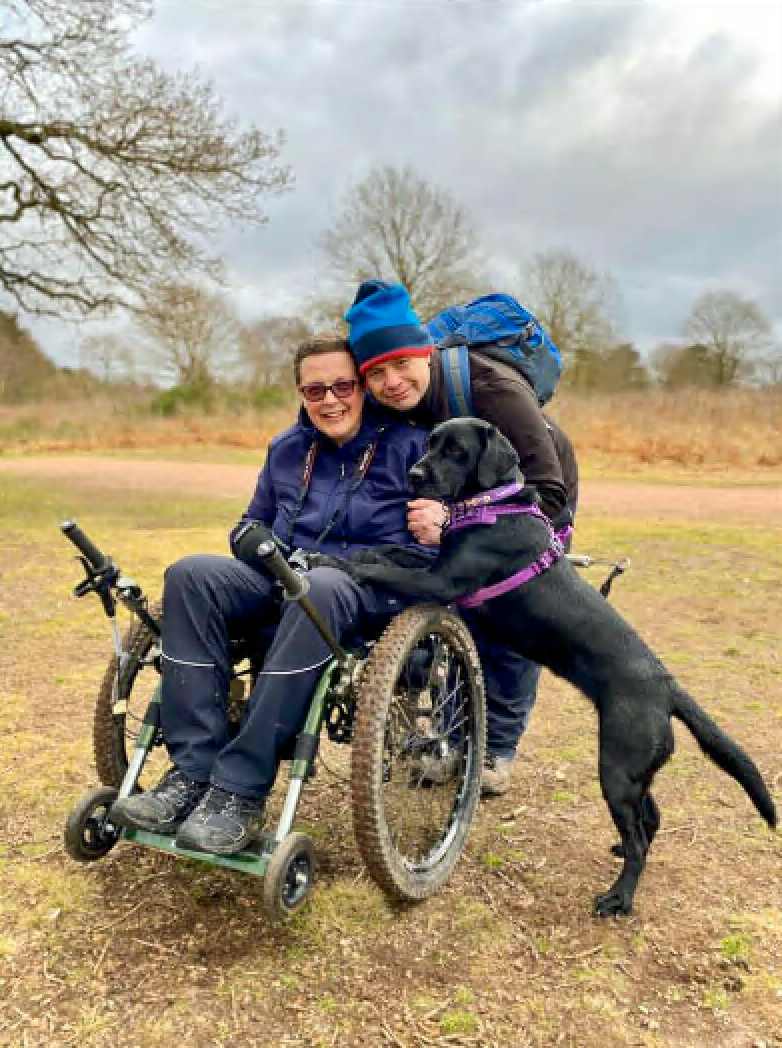 Neil said: “Liggy does a lot for Nicki but the most important thing for me is knowing that she has support with her 24/7. Whether it’s enabling Nicki to load and unload the washing machine or to pick things up off the floor when Nicki drops them, which with her condition is very common, or even to help her get undressed – they all seem like small things but when you put them together it’s a lot.”

For Nicki having Liggy, a black Labrador trained by Canine Partners since selection at eight weeks old, makes her feel a lot more confident and she doesn’t worry that something might happen when going into unknown situations.

Nicki said: “I’ve always been very independent but Liggy has enabled me to continue to be as independent when I became disabled, losing my independence was my biggest fear. At work I used to have to go and get someone to pick up a pen for me, now I don’t even have to think about it as Liggy will pick up that pen for me.” 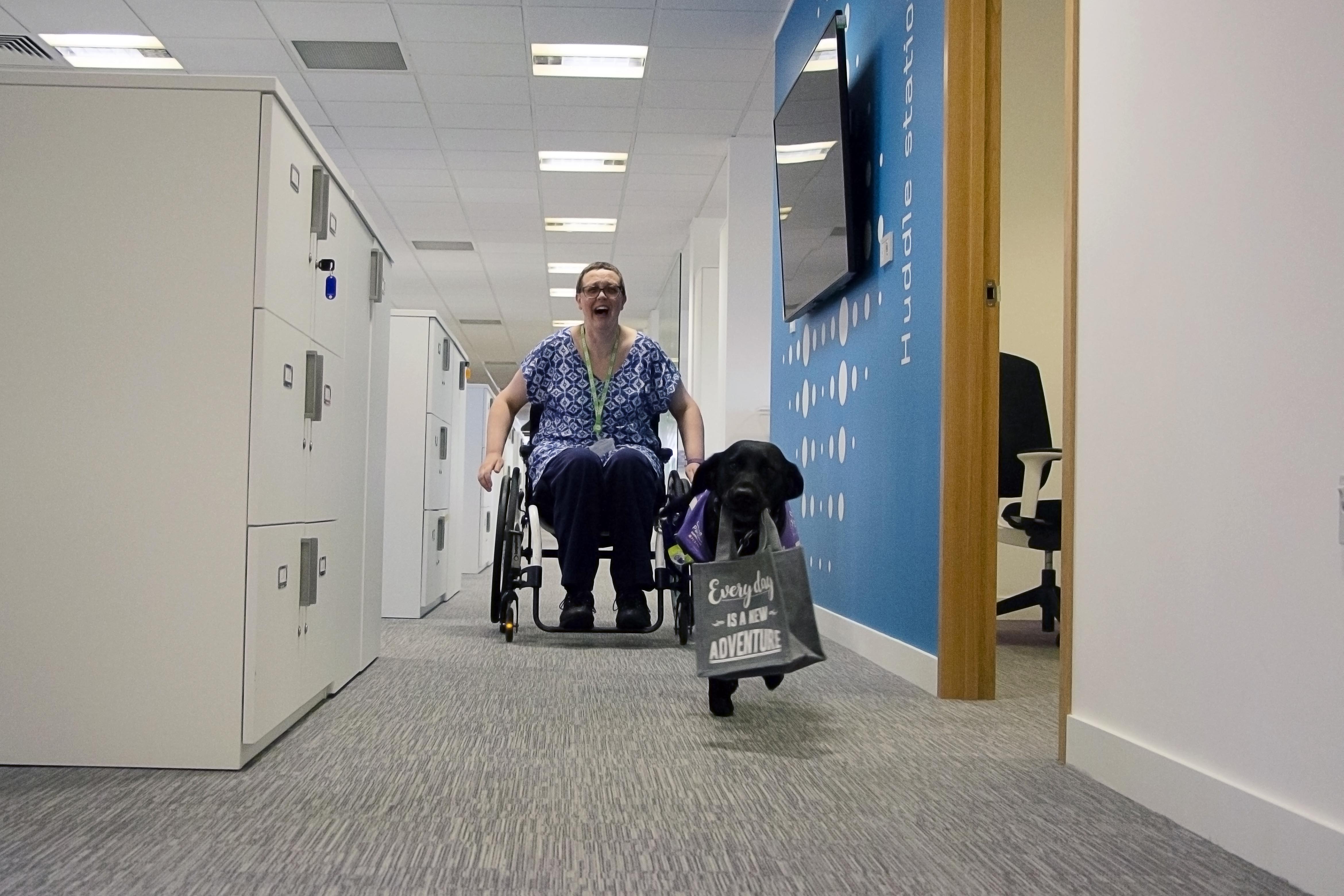 In the workplace, Nicki’s manager, Ros Aspinall, describes her as an extremely talented designer, a strong manager who manages the company’s clients, and a wonderful person to have around in the office.

Ros said: “Liggy helps Nicki throughout the day, such as picking things up off the floor which I know is really helpful, but I think beyond that, it’s the psychological benefits I’ve noticed the most. It gives me peace of mind to know that Nicki has Liggy, who is available to alert us to any problems.”

“Even though Liggy is a working dog, she brings a very significant degree of fun to Nicki’s life and it’s the relaxation as well as the work aspect that really enriches Nicki’s life.”
– Janet, Nicki’s mum

Since having Liggy, Nicki has been able to restart her successful career, and study and complete a Master’s Degree – all of which her husband Neil attributes to having canine partner Liggy by her side. 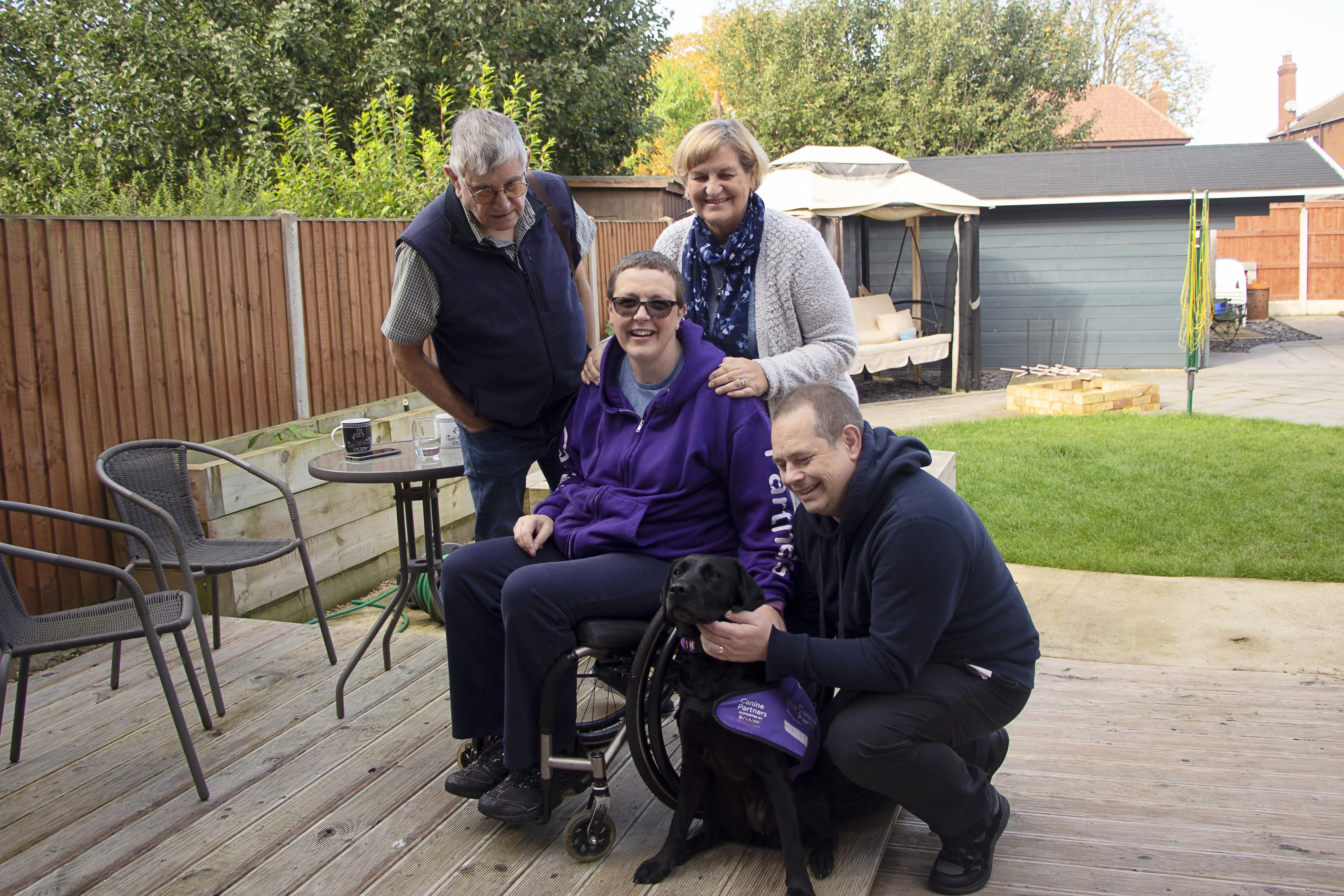 Neil said: “As we don’t know what the long term outcome is of the injuries, we don’t know how long she will be able to work. Having Liggy gives her the additional support to help her to continue to do that for as long as possible, which is really positive for Nicki physically, mentally and emotionally.”

For Janet and Mike, they have found relief in Liggy being there for Nicki as they have seen Neil relax a lot more and they don’t have to worry as much.

“It will always be a worry, because Nicki’s condition is deteriorating and it won’t get any better, but there are things that Nicki has to cope with that show how brave and confident she is,” says Janet.

When Nicki was first injured, she was completely paralysed and Neil was having to provide all her care needs but now the couple are able to do things that ‘normally happen in a household’.

Nicki said:  “Neil was feeding me while I was lying flat on my back just so that I had something to eat and when I needed the toilet he would physically carry me while I was screaming in pain, and he did that because he loves me but that was never how I wanted our married life to be. We are still a married couple but now we can be a ‘normal’ married couple again.”

“There was a point where I was getting up in the morning, going to work, and then going to bed. But now with Liggy, I feel like I have a life again.”
– Nicki, partnered with canine partner Liggy 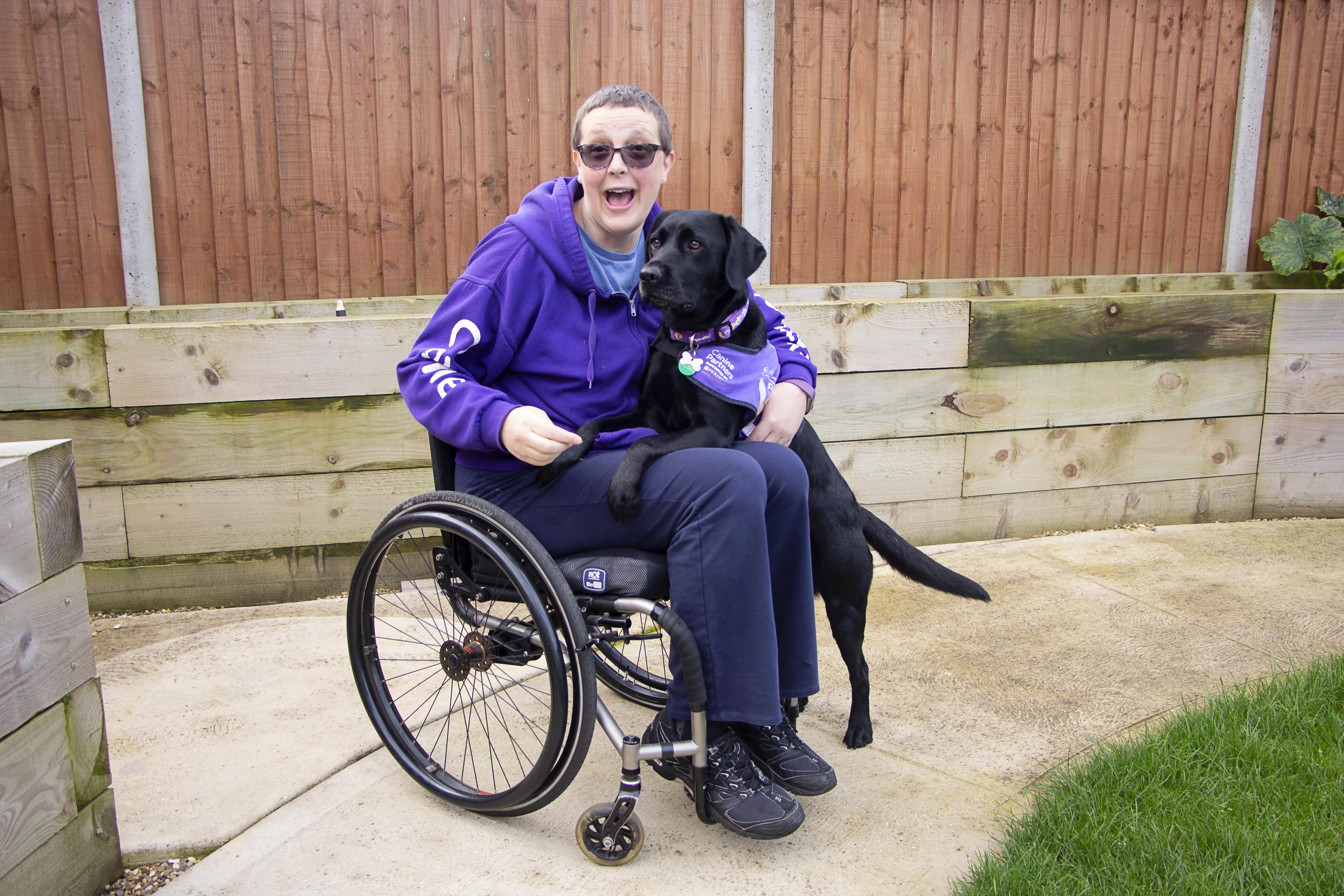 With Liggy helping her with daily tasks, Nicki now has more energy to do the things she finds enjoyable and to spend more time with her family.

International Assistance Dog Awareness Week was created to recognise all the devoted, hardworking assistance dogs across the world and runs from Sunday 1 August to Saturday 7 August 2021.

Canine Partners relies on donations and legacies to fund the creation of our life-changing partnerships, which transform the lives of not only their human partner but the lives of their family and community too.

Any donation made to Canine Partners could help more people, like Nicki, be partnered with an amazing canine partner assistance dog. Please visit caninepartners.org.uk/donate to make a donation.