Posted 1 month ago in the Our partnerships category

Susan was partnered with Buster in 2013, after being diagnosed with Transverse Myelitis, an autoimmune disease which meant Susan was wheelchair bound. 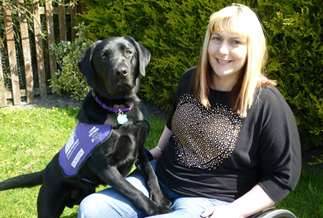 Susan was partnered with canine partner Buster in May 2013. This is her story.

When I was 31 years old I decided I needed to make some changes in my life, so I gave up my job of 10 years, moved home with my parents and started my own business, which was very exciting! I started my business in the October and was really enjoying it but by the middle of December I came down with the flu. Throughout my illness I continued to work as it was so near to Christmas I didn’t want to let my clients down. During Christmas I was feeling better, just a little run down, and was thankful for some time off enjoying the festivities.

On January 24 on my day off I went to town with my sister Paula. We enjoyed a hot chocolate and a cake, had a wander around the shops then set off to the supermarket so Paula could do her food shopping, where I was in charge of pushing the trolley. We bickered while we shopped which is quite normal but then all of a sudden I got a pain in my back, which wasn’t at all normal! We carried on shopping but I became more and more uncomfortable and started to feel sick so I left Paula to finish packing her shopping at the checkout and I waited for her in the car. We went home and I took some painkillers which made me feel a little better.

That evening I took some more pain relievers and went to sleep feeling uncomfortable and worrying how I would manage the next day at work. I woke at 4am in a lot of pain and when I tried to get out of bed it felt very strange walking, so from my mobile phone I phoned the house phone to wake up my mum as I felt I couldn’t  even walk to her bedroom. I was in so much pain my mum decided she would take me to the hospital. I shuffled to the car feeling very scared because it all felt so strange. We booked into A & E and waited, luckily it was very quiet so we only waited 45 minutes. The nurse called my name but I couldn’t stand up, so she found two paramedics to pick me up and put me on a trolley.

I couldn’t feel my legs and quickly had several doctors examining me, eventually I saw a neurologist who seemed very concerned and said he would send me to intensive care which was terrifying. The paralysis continued to rise up my body until it stopped just under my bust. I stayed in intensive care for about a week and was in hospital for seven weeks having all sorts of tests and treatments before I was diagnosed with Transverse Myelitis, which is an autoimmune disease likely to have been triggered by the flu causing my immune system to attack my spinal cord, causing devastating damage.

I left hospital and went into a neurological rehab for three months. I was devastated and so was my family. Everyone was trying to cope with a huge change, friends took over at work for me and family and friends rallied round to try and get through a very difficult time, not knowing if I would recover any feeling. Facing life in a wheelchair seemed so unbelievable and I didn’t think I would be able to face it.

I went home for a few months and life was incredibly hard! I still felt very unwell. I went into Stanmore Spinal Injury Hospital for more rehab which did help a lot, although I still couldn’t come to terms with what had happened.

My sister Paula had read about Canine Partners and said I should apply, so we did. I was accepted after the application process and was put on the waiting list, at this point I had been in my wheelchair for two years with very little progress.

I was partnered with black Labrador Buster and went to the Canine Partners Southern Centre for a two week training course which I didn’t want to do as it took me out of my comfort zone, but I really enjoyed it, and Buster was fab!

I had not been out on my own for two years but Buster had to be walked! I went out for the first time just me and him and it felt great, it still does. I have now had Buster for a while, and he has made a huge change to my life. Buster helps me with lots of things like picking up after me, getting the washing out of the machine, closing the garden doors, and he now helps me with my shopping.

We have just started doing agility together, which we both enjoy and we are looking forward to trying other classes in the future. I’m now able to get out and about just the two of us, meeting new people and enjoying life with a little help from Buster.

What I hadn’t realised was how much he would help with my confidence. Buster brightens up my days. I love him and couldn’t imagine life without him.