Mike is a Puppy Parent volunteer for Canine Partners and has helped 8 puppies along their journey to becoming life-changing assistance dogs. This is his story:

My name is John Michael Cormack but everyone knows me as Mike. I am 75 years old and live in the village of Swanland in East Yorkshire, and I am a Puppy Parent volunteer for Canine Partners.

I have been in this role for over 10 years and I am now working with Darwin, who is puppy number 8 for me. 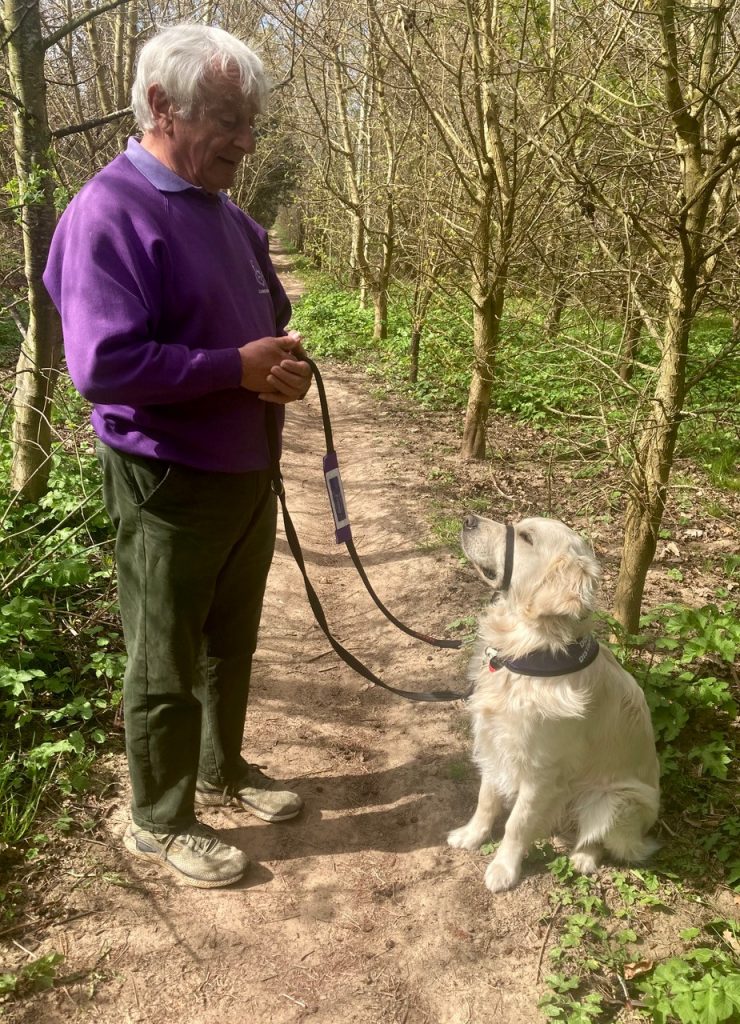 The role of Puppy Parent volunteer involves me going to weekly training sessions which then enables me to continue that training at home. We also need to socialise the puppy with many trips to the shops or shopping centres occasionally using the bus or train. The puppy has to feel at ease near traffic be it heavy or light, be calm around or ignore other animals and to understand certain commands such as sit, stand, down, touch, tug, and many others. The aim is to turn out a dog that is both obedient and shockproof and the Puppy Trainers at Canine Partners are there every step of the way to help make sure this happens.

For over thirty years I have been a volunteer helping people with various disabilities at a local Swimming for the Disabled club. It was at one of the club sessions that I first became aware of Canine Partners. A sister of one of our members took on the role of Puppy Parent. I had not long retired and as the father of a disabled daughter myself I became very interested and asked for weekly updates from the lady concerned. I love dogs, as does my daughter and although Joan, my wife, was at that time a little hesitant, we decided to make further enquiries. Canine Partners held a meet and greet session at one of the libraries in Hull at which my daughter, along with her support worker, attended. They asked the right questions and found out that training was every Thursday at one of the local veterinary practices and should I be interested I could attend. Which of course I did.

The following Monday we had a call from the trainer to say that she had two puppies but only one Puppy Parent volunteer available, should I be interested in taking one. I mentioned this to Shona, my daughter, who then went to ask her mum if we could take this pup on. With the smile on Shona’s face and her obvious enthusiasm Joan found she could not possibly say no and, Carter, a Goldendoodle, arrived a few days later. And the rest, as they say, is history.

I suppose one of the qualities that I have, apart from being retired, is patience, which is called upon quite a lot with a new puppy!

It is almost impossible to walk a dog and not make friends and being a Puppy Parent takes this to a new level as the Canine Partners uniform on both the pup and the Puppy Parent attract such interest. Taking your pup to the shops or travelling on the bus or train you become known, with many questions as to how the puppy is doing or if your previous puppy is now partnered.

It is always a sad day when your pup leaves for their Advanced Training but the reward comes when the person who has received your pup gets in touch to say how their Canine Partner, in which you played a part, has settled in and has changed their life for the better. Seeing the progress that your puppy makes, and knowing that you’ve played a part in their journey is what makes this role so rewarding, and I would recommend it to anyone who wants to volunteer.