Posted 9 months ago in the Our partnerships category

Faye has Cerebral Palsy and uses a wheelchair full time. Her canine partner Odile, who is described as a 'golden treasure', is always there to help her with daily tasks and as her trusty companion.

Faye was partnered with canine partner Odile in April 2014. This is her story:

My name is Faye. I’m 28 years old and have severe Cerebral Palsy, meaning that I use a wheelchair permanently as a result. I have no use in my right hand and limited use in my left.

In 2011, I decided to move out of my parents’ house and live on my own. Even though I need a lot of physical support from people, this is something that I’ve always wanted to do. On 2 January 2012 I achieved that dream and moved into my own bungalow, supported by a team of Personal Assistants.

Despite being independent from my parents, I still had to ask my PAs to do things like pass me the remote control or pick up anything that I had dropped. I also needed them to be my shadow when going out as I had never felt confident enough to do this on my own, and they also had to pass my purse to cashiers in shops and take goods from them on my behalf.

Applying for a canine partner

I was enjoying my life in my new home, but felt as though I wanted to do more for myself and not rely so heavily on others for support, so I decided to bite the bullet and apply for a canine partner.  I had seen the wonderful work that these dogs do on various television programmes and I wondered if one would be suitable for me. The application process is long, but very necessary and thorough. The two-year wait for a match felt like two centuries!

I’ll never forget the day that my Advanced Trainer phoned to tell me that they had found a potential match for me. I put the phone down and was literally shaking with excitement. The matching visit had been planned for the following week, but even that felt like it took forever to arrive! I went to the centre, and my mum and I were told to wait for my potential partner. I was a bag of nerves, but before I knew it, a ginger ball of fur bounced into the room and put me at ease straight away.

Since that moment I have been in love with Odile. I wasn’t really a dog lover until I met her, but now I’m completely smitten. Even the simplest thing, like Odile picking up a dropped item, has made the biggest difference to me because I don’t have to ask one of my PAs to do it anymore. She is so enthusiastic when it comes to tasks; I have never known anyone so eager to take my coat off for me! She loves the reaction that she gets and every completed task is followed by a content wag of the tail as if to say: “Yes, I’ve done a good job!”

Odile has recently started to hand my purse over to cashiers for me. Supermarket staff are always eager to see her do this, and we even got a round of applause from staff and customers on the surrounding checkouts a few weeks ago! But it’s not just the physical things that Odile does for me, but the sense of companionship that I get from her is amazing. I used to dread being on my own in case I dropped something or needed a door opening. These things aren’t a worry for me anymore, as I know Odile is always there and eager to help in any way she can. Even if I don’t need any help, she’s great just to natter with – I just hope that she never learns to talk because I might get into trouble!

I’m getting out a lot mo 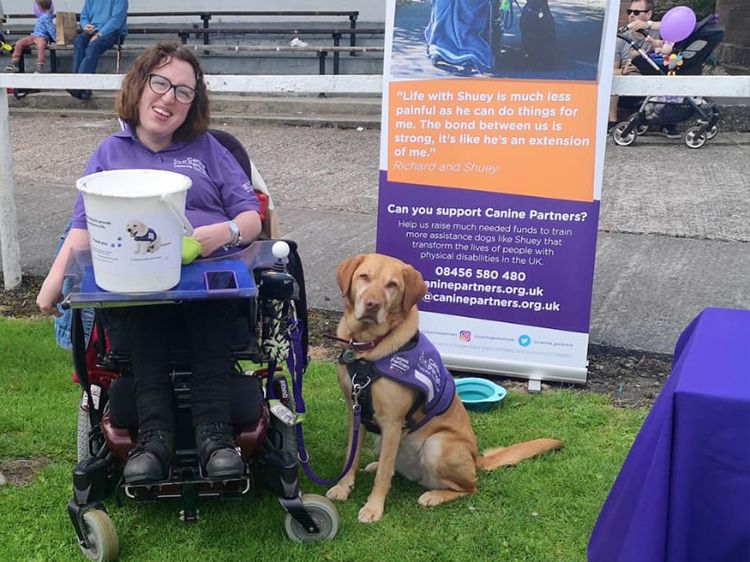 re than I used to since being partnered with Odile.  People are always stopping to talk to us, which didn’t really happen before as they were unsure how to approach me.  After being at home with Odile for just a few months, I felt confident enough to venture out with her on my own – something that I never thought I’d be able to do. When I had my flu jab I decided to go to my doctor’s surgery with Odile, telling my PA to wait at home.  It’s only a half a mile journey, but it was so liberating and I was over the moon about the fact that I had been able to do it with my canine partner by my side!

If I had a pound for every time someone commented on Odile’s eyes or how beautiful she is, I would be a millionaire! Sometimes I feel like I’m Odile’s assistant rather than the other way around.  She makes me laugh so much and I think we’re quite similar as she likes being around people just as much as I do.

Odile has been a brilliant support to me during the pandemic.  Taking her out for walks and focussing on teaching her new tasks has given me something to do each day and has been a very welcome distraction.

I’ll never be able to thank Canine Partners enough for partnering me with Odile. She gives me a purpose, as I now have to look after her rather than just be the one who is being looked after.

We took part in a talk about disability awareness at a local Cub Scout group, where one boy described Odile as a ‘golden treasure’.  He was right – she really is, and I intend to let her know that every day of our partnership.

Our amazing dogs make a huge difference to the life of their partner, and never more so than during the Covid-19 pandemic. Donate today and help us to continue transforming lives.