Posted 5 years ago in the Our partnerships category

This year we have been celebrating our 25th anniversary. That’s 25 years of changing the lives of people with even the most complex physical disabilities by partnering them with a specially trained dog that can undertake a range of tasks. 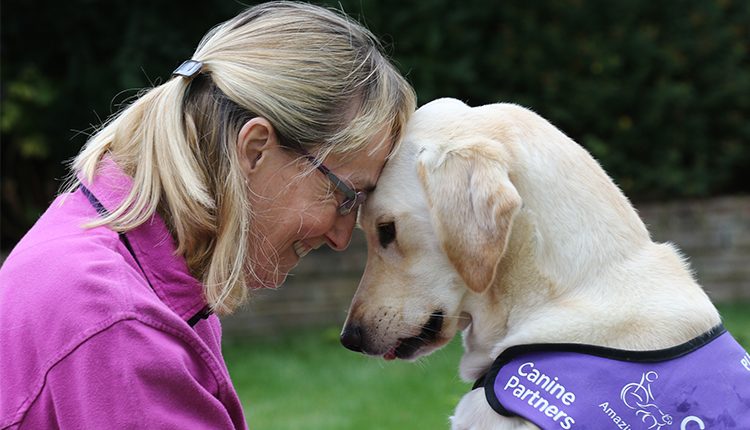 The tasks that these amazing dogs perform not only increases independence for the disabled person, and gives them confidence to engage in social interaction again, but also reduces pain and fatigue levels as well as their partner’s reliance on carers. As part of our 25th anniversary celebrations, all 340 partners were asked to name the 25 most useful tasks their dog performs for them on a daily basis. While some of the results were predictable, the sheer range of tasks the dogs undertake was staggering, underlining how invaluable they become to their disabled owner.

More than 90 per cent of respondents said the most useful task was picking up dropped items, while 82 per cent said their dogs carrying items made their life easier. These seemingly small tasks for able-bodied people really become frustrating for those people in a wheelchair or with mobility issues. Third popular on the list was undressing the partner, with 76 per cent stating that was an important task for them. This one really ensured independence and the reduction of carer involvement, especially in the evening, allowing the disabled person to lead a more normal life.

Opening doors was the next popular with 74 per cent mentioning this, but interestingly shutting doors had a lower percentage of 66 per cent which was shared with the task of unloading the washing machine. Fetching things, including the post, was high on the list with 60 per cent mentioning those activities. 52 per cent said that help with shopping, including paying the cashier, was beneficial to them, while 36 per cent benefited from their dog retrieving cash and a card from an ATM for them.

Interestingly, although partners were asked only about physical tasks, more than 50 per cent of respondents stated that boosting confidence and emotional support was just as important.

Some of the more unusual tasks that were mentioned included tidying toys away (36 per cent); handing the disabled person pegs to hang out washing (22 per cent); tugging the duvet on and off (16 per cent) and fetching the towel when their owner is showering (14 per cent).  Six per cent mentioned their dog helping to turn them over in bed, and six per cent also said their dog flushing the toilet was useful. There was even mention of the dog letting their cat in and out, handing a bus pass to the driver and straightening rugs and mats so wheelchairs don’t get caught.

Andy Cook, our CEO, said: “So it seems that a canine partner can help in a huge number of ways with practical tasks, but perhaps the most powerful statistic was that more than 40 per cent of respondents said that their canine partner changed people’s attitudes to the disabled person. That really encapsulates the ‘Amazing dogs. Transforming lives.’ strapline that Canine Partners uses to describe their work.”