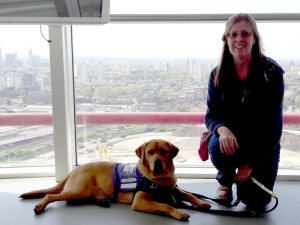 DAREDEVILS are taking their fundraising to new heights.

Wendy Churchman is preparing to join a team of more than 50 people as she takes on Britain’s highest freefall abseil to raise vital funds for assistance dog charity Canine Partners.

The Chelmsford mum-of-two will leap from the top of the UK’s tallest sculpture, the ArceloMittal Orbit which towers 114.5-metres above Queen Elizabeth Olympic Park – home of the London 2012 Olympic and Paralympic Games.

The challenge aims to raise cash for Canine Partners, a charity that trains amazing assistance dogs that transform the lives of people with disabilities, boosting their confidence and independence.

The dogs are taught a range of everyday tasks including picking up and fetching items, opening doors and dressing a person. They can even help use a washing machine and they can fetch help in an emergency.

Wendy became involved with the charity in October when she began volunteering as a puppy parent, looking after a trainee assistance dog called Phoenix, a seven-month-old Labrador cross golden retriever.

Now she is looking forward to her first fundraising challenge for the charity, taking part in the abseil alongside her friend Merrill Rowe and more than 50 other participants.

Wendy, 53, who runs a sign-making business said: “I have abseiled a few times already but never from so high and I’ve never done a freefall.

“I would leap at any chance I got to do another abseil, so when I heard Canine Partners were challenging people to abseil from the ArceloMittal Orbit I was keen to sign up. It’s exciting. Taking part in this abseil is my dream.

“I became a puppy parent because I heard how amazing these assistance dogs are, helping people maintain their independence. They’re a great support.

“You get so much out of being a puppy parent because you know you have changed someone’s life.”

Wendy has already raised more than £299 for Canine Partners towards her £500 fundraising target.

To support with her fundraising visit justgiving.com/Wendy-Churchman5

There are still a few more places to take part in the abseiling challenge on May 18 which is sponsored by Arbuthnot Latham.

The charity is also calling for more people to become volunteer puppy parents like Wendy and help train an amazing assistance dog during its first year. Puppy parents receive full ongoing support, both at their homes and at puppy training classes. Food, equipment, vet bills and temporary holiday care is provided.