Volunteer of the Month – Meet Community Champion Liz, from the New Forest

Posted 4 weeks ago in the Volunteers and fundraisers category

Liz is a Community Champion for Canine Partners, which involves speaking, fundraising and raising awareness of the charity. This is her story. 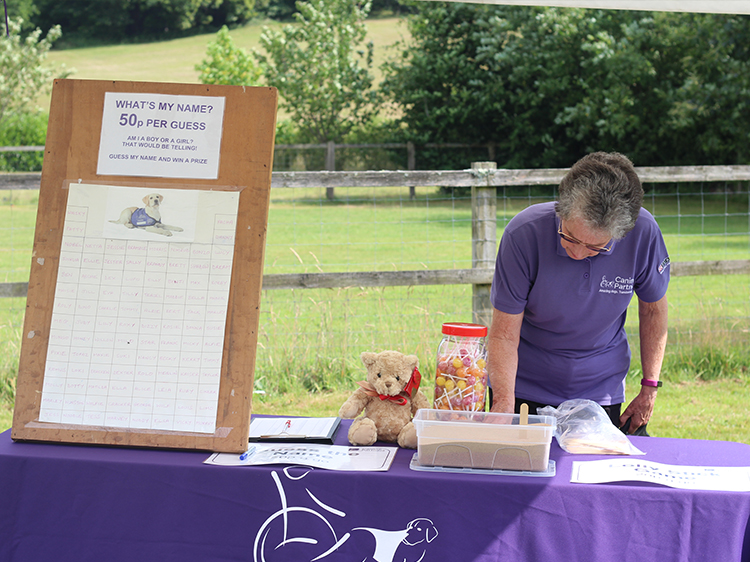 Liz has been a volunteer for the charity since 2014, when she became a volunteer Speaker. Over the years she has taken on other aspects of volunteering and is now a Community Champion.

Liz describes why she became involved with Canine Partners:

“I first discovered Canine Partners when I was surfing the internet for charities to support in lieu of sending Christmas cards. Canine Partners was the one that really stood out. I usually support animal charities but I chose this one as it involves both people and animals!”

Liz describes what her role as a Community Champion involves:

“As a Community Champion, I undertake speaking engagements for local groups such as WIs, Rotary and Probus clubs and other social clubs – I really enjoy this aspect. In addition, I attend local events such as dog shows and fetes, where we sell merchandise and run fundraising games. I have a small team of friends who help me with this. To date I have organised two events myself – a quiz night and a sponsored walk. Both of them were hard work by were so satisfying and useful as fundraisers. I also have previously helped with Canine Partners’ involvement with Dogstival. Networking is key to being a successful fundraiser and I never go out without my business cards as one engagement often leads to another!”

Liz describes what experience she has that suits her voluntary role:

“All my working life I have had jobs which involved working on my own initiative in admin roles and I have always enjoyed developing projects. It is stressful at times, but once I decide on something I follow it through regardless. I moved to a new area in 2016 and didn’t know anyone, but my networking skills and determination came into play as I set about finding speaking engagements and fundraising opportunities for Canine Partners. This led to several Charity of the Year opportunities and raising awareness of the charity.

Liz describes what it is like to volunteer for Canine Partners:

“I have worked alongside partnerships at speaking engagements and it has given me a unique insight into the benefits of a canine partner. Seeing the difference their dogs make is all the reward one needs. I would encourage others to volunteer for Canine Partners as it’s as varied and rewarding as you can get!”

Become a volunteer for Canine Partners:

There are lots of ways you can volunteer for Canine Partners. To find out more, please visit caninepartners.org.uk/volunteering