Posted 4 weeks ago in the Our partnerships category

In 2002, Samantha was diagnosed with a progressive neurological condition called Dystonia. Her life was transformed when she was partnered with canine partner Bugsy. 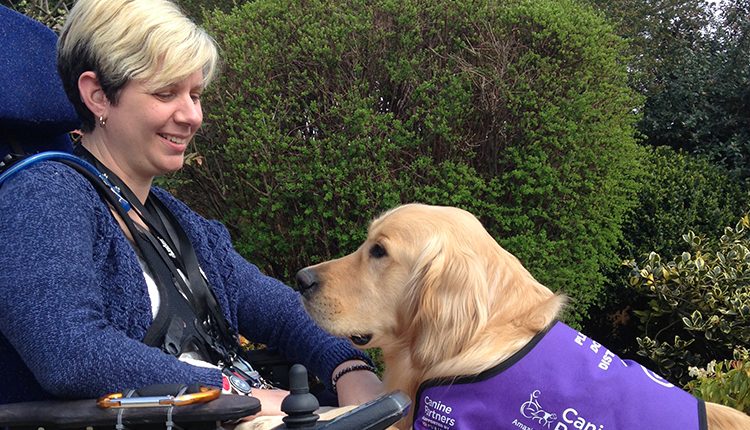 Samantha was partnered with canine partner Bugsy in January 2015. This is her story.

I qualified as a nursery nurse in 1994. I have been a nanny to two families and worked in a nursery as a nursery nurse looking after under two’s. But then in 2002, after many investigations, I was diagnosed with Dystonia. There is no treatment or cure and it is progressive, which means it worsens with time. This came as an almighty blow.

The neurological condition causes muscle contractions, spasms and unusual postures. I have a rare form, which affects all four limbs, my jaw, oesophagus, bladder and bowel.

As the years have gone on my Dystonia has progressed and my hands have got worse. It causes my fingers and thumbs to contract into the palms of my hands, my ankles to invert and I struggle to open my jaw. It has also caused me to need several operations, including the removal of my bladder and colon.

I lived with my mum who looked after me as my condition progressed, until 2007 when she sadly passed away. After she died life became very hard. I was struggling around the house and was walking on the sides of my feet, as I refused to go into a wheelchair permanently. Believing I had nothing to lose, I agreed to have an experimental operation to straighten my inverted ankle and toes in the hope I would be able to walk again. Unfortunately the operation was unsuccessful. I was left unable to weight-bear at all and my deformities returned. I then had to have carers as I lived on my own.

I was finding life very hard and I was really struggling. I was unable to take off my cardigan or coat, or my socks and boots when my feet became swollen, as I had to wait for carers. I was constantly dropping things and relied on carers to come and pick things up. I wouldn’t go out on my own as I felt self-conscious and didn’t like asking strangers for help, so I had to rely on friends to help me with shopping.

I decided to apply for a canine partner in 2012 after seeing the charity and the amazing dogs at a Motability show. Waiting for a canine partner was so hard but, as it happened, most of my time waiting I was having major surgeries and recovering from them. I was offered a potential dog in 2014 but I had to turn the offer down as I was due to have emergency surgery.

Once I had recovered from that operation I let Canine Partners know and it wasn’t too long before I got a phone call inviting me to the Midlands Training Centre to meet my potential canine partner. I will never forget that phone call in December 2014. I was overwhelmed with joy.

I met Bugsy, a handsome Golden Retriever in January 2015 and I fell in love with him straight away. He is so friendly and loving – and he’s a stunning looking boy too! I struggled to hold back my tears of joy. It was a dream come true. I spent a few hours working with Bugsy and going through paperwork then I came home full of excitement and anticipation to find out whether Canine Partners thought we were a match. Waiting for that phone call was so hard, it felt like a lifetime.

Finally, his trainer phoned and said they felt we were a match and I couldn’t believe he was going to be mine. I cried with joy because I was so happy, but I had a difficult wait again while they trained Bugsy to do some of the more tailored tasks I needed him to do for me. I was unable to do the Onsite Training Course (OST), so Canine Partners arranged for the trainer and Bugsy to come to my home instead. I couldn’t take my eyes of him, it didn’t seem real. The two weeks flew by and I thoroughly enjoyed getting to know Bugsy. Seeing him working for me was very emotional. 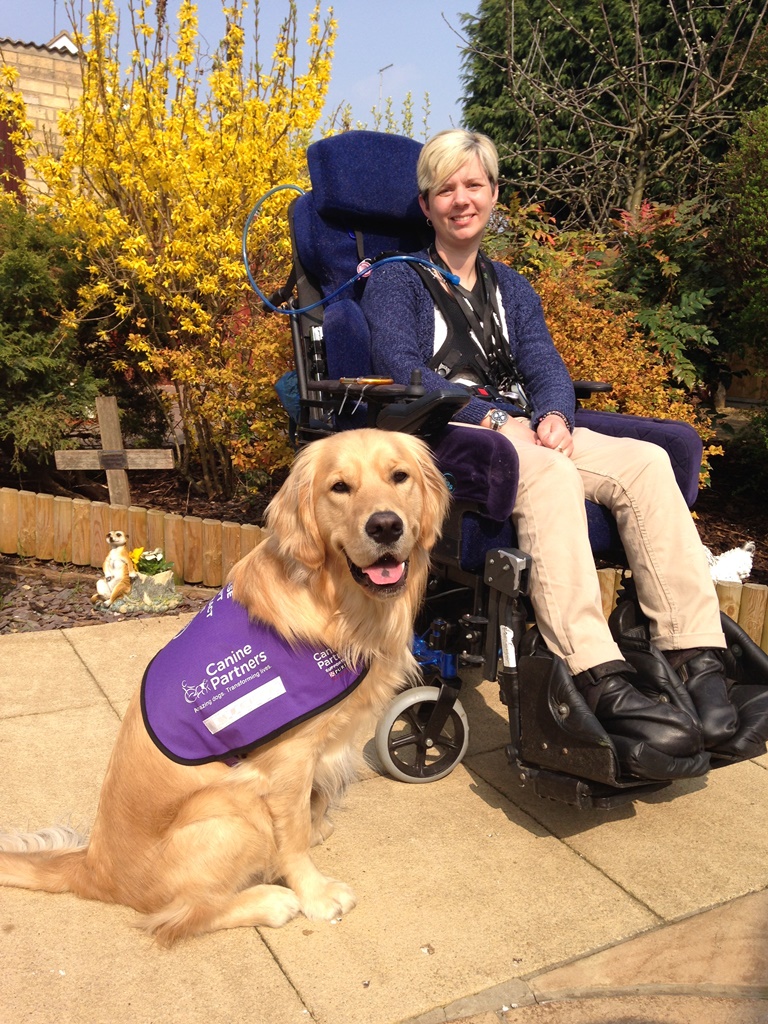 Bugsy is amazing and he does so much for me.

He picks up items as soon as he sees or hears me drop them even without me asking him, he opens and closes doors and draws, gets items out of cupboards including his own bowl at meal times (which he puts away again afterwards). He opens the bin lid, puts rubbish in and closes it again, fetches items around the house including the post, puts his toys away, and loads and unloads the washing machine. He also presses lift and disabled access buttons to open automatic doors, helps me get items off of shop shelves, and passes my purse to cashiers. Bugsy also helps me undress – undoing zips and taking off boots, socks, coats and cardigans. He also nudges my legs to help me get into bed and most importantly, he can activate my lifeline and get help in an emergency.

Now I can’t imagine life without Bugsy. He makes me feel so much more independent. He has given me my life back. I’m also confident to go out on my own now as I have Bugsy by my side. Bugsy is a very loving and friendly boy and he’s so keen to please. He loves playing with toys – his favourite is a big tiger he has had since he was a puppy. He is also a wonderful companion and he means the world to me.